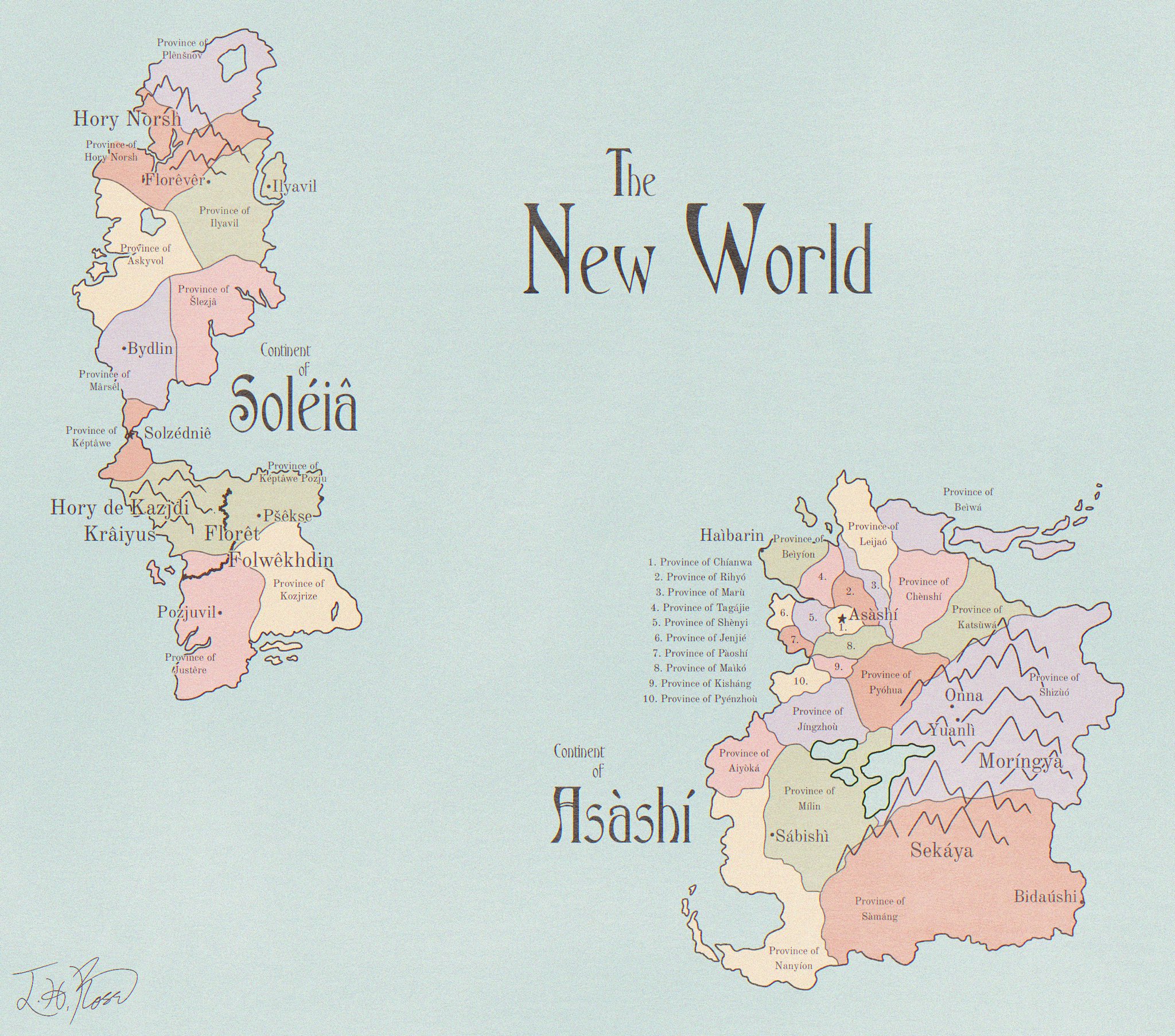 Soléiâ is the western continent of the New World. It is somewhat thin, and very long, its northernmost reaches being well within the arctic circle of the planet. The continent is split in two halves which are connected by a very thin isthmus. This isthmus holds the capital city, Solzédniê.

Despite being separated from Solzédniê by a mountain range, due to historical and other factors (like a more agreeable climate), the majority of the Soléiân population lives in the southern half of the continent. Here, the average town size tends to be around 3,000-5,000 people, which includes smaller hamlets who consider themselves offshoots of the larger towns nearby. The further north one goes, however, the smaller the average town size becomes, with most towns often being less than 1,000 people in the northerly regions of Soléiâ, and the northernmost province being populated largely by small nomadic groups. During the early 3000s S.A., the largest city is the capital, whose population is 250,000 people.

The southern portion of Soléiâ has a temperate climate, with snowy winters and hot summers. The environment consists of long, rolling hills and steep valleys, interspersed with broadleaf forests, meadows, and farms. Beyond the provinces of Šlezjâ and Mârsêl, the broadleaf forests are exchanged for evergreens, and the summers become generally cool, and the winters long and harsh. The northernmost province, Plênšnov, is a barren tundra with extremely long, cold winters.

Asàshí is the eastern continent of the New World. It is roughly elliptical, with long strings of islands on the northeast and southwest of the continent. The continent lays fairly far south on the planet, with its southernmost regions around or on the equator. The capital, Asàshí-Zhaùlá (Asàshí City), is in the northern part of the continent, and relatively close to the coast.

The northern portion of Asàshí has a temperate climate, with snowy winters and hot summers. The environment here is mostly a large plain, full of towns, farms, and interspersed with a few broadleaf forests and other wild areas. From the provinces of Jíngzhoù and Pyóhua onwards to the south, the environment becomes extremely rough and hilly, and is largely covered in tropical rainforests. This becomes more extreme in the province of Shizùó, which is covered in numerous large mountains and even more forests; however, the environment here is colder due to the high altitude of nearly the entire region. The mountains taper off in Sàmáng, a province which entirely consists of a hot, sparsely populated desert.